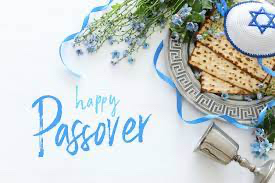 At Sundown on Passover if the weather is stable enough for the Patriarch to participate the Martin 5 will be celebrating. I want the Martin 3 to grow into adulthood understanding clearly the foreshadowing of Who was to come.

On Passover at sundown we step outside under the big full moon and we will blow the family shofar. Then we partake in an abbreviated sedar meal, we will read through our coffee company complimentary copy of our Haggadah and hang a red ribbon over the door frame of our home.

The Martin 3 will find the hidden afikomen that has the middle matzah that has been broken and hidden away and the finder will win a prize. It’s usually chocolate in nature.

It’s not the typical Jewish way of doing it, nor is it the norm, but it’s our way of connecting that Scarlet Thread that runs throughout the King’s Book. The old and the new.

A couple of years ago as I made preparations for the meal I had asked Charlotte to remind me of a particular Hebrew word, she had the Google translate at her disposal and I knew she’d be able to correctly interpret.

As I handed her the object with the Hebrew word, I said, “I think it just says Passover.” The Word Passover always looks to me like GOD written in backward (or frontwards if you’re a legit Hebrew scholar) in English.

In a matter of moments she confirmed my suspicion and handed it back to me to continue with my preparations.

The evening meandered on and just before bed, in her typical way she came to see me, tell me goodnight, snuggle a bit, and she handed me a drawing she had been working on since her impromptu interpretation session. It simply said “Passover” in Hebrew and she had added some floral accents.

She smiled as she handed it to me, pleased with her work and with pleasing me. Beauty at its best. A pureness of heart, a gift given with nothing expected in return, a beautiful and accurate depiction of what my King prepared to do this very week so long ago.