He came out of the door marked “Kitchen” wearing an apron and a t-shirt with some BBQ something like WGPM (world’s greatest pit master) or something about Smokin’ something.

The t-shirts always crack me up. I appreciate a funny t-shirt.

He made his was around to tables handing quarters to his youngest patrons. He would pause at the tables and ask how lunch was and if everything was alright. My eyes followed him around the room. He would pause at tables making small talk with the adults and passing out quarters to his youngest patrons. There were rambunctious little cowboy boot wearing girls and sneaker wearing boys. When he would hold up the quarters in their direction, their faces would shine with excitement as they gazed upon that silver circle held between his thumb and forefinger.

I mused on his small business owner cohort at the end of the road in the opposite direction. He does the same thing, hands out quarters to the children who frequent his establishment, and despite the obvious differences in that one is a restaurant and one is a tire store, the proprietors, at least in that regard are similar.

I watched as those children raced to the machine and were elated over a handful of candy. Their mamas attempting to coax them back to the table to finish their lunches. I noticed that many of them literally had nutrition on their plates, yet they readily abandoned it for the handful of crushed candies. A momentary sugar exchanged for real Sustenance.

I was reminded of the quote by C.S. Lewis.

“It would seem that Our Lord finds our desires not too strong, but too weak. We are half-hearted creatures, fooling about with drink and sex and ambition when infinite joy is offered us, like an ignorant child who wants to go on making mud pies in a slum because he cannot imagine what is meant by the offer of a holiday at the sea. We are far too easily pleased.”

I too, am like those tiny patrons, ignorant of what truly awaits me, satisfied with the temporary and non-beneficial ways of this world in exchange for the beautifully beneficial things of God. 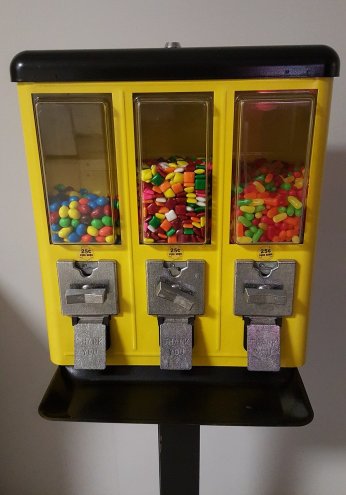