The smell of Cinnamon is a delicious smell. I can remember those delicious cinnamon toasts that my mother made for breakfast when I was growing up. We would always eat the parts with the extra pats of butter on them first. I can taste them just by thinking about them.

I had not made cinnamon toasts in a long time. I was changing around the spices in my cabinet and had not replaced the container of cinnamon when my husband came into the kitchen. He wanted to know what I was going to cook with cinnamon. I didn’t have 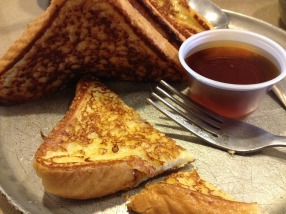 the heart to tell him that I was just cleaning the cabinet so I asked if he wanted cinnamon toasts for breakfast. At our house, we add extra syllables to cinnamon toast. It’s more like “cinnaminny toasties.” I do not remember how that started but it is still what my husband and I call them.

The next morning I was preparing the cinnamon toasts and I looked at my cookie sheet. It really needed a good scrubbing, but that was going to have to wait. I thought I would just put some parchment paper on the cookie sheet and save the scrubbing for later in the day. I should have just used it. It’s not like it was dirty. It just looked dirty.

I usually make cinnamon toast in my toaster oven, but my toaster oven and I had a parting of the way recently so I was using my oven broiler. Never, and let me say it again, Never use parchment paper when using your broiler. It caught fire immediately. I calmly said, “I need some help here.” Eddie turned to see the cookie sheet in flames as I slid it on top of the stove. Let’s just say that I didn’t need a fire extinguisher, but none of my cinnamon toasts survived. We had a good laugh after the excitement was over and then made new cinnamon toasts. I used to have a smoke alarm in my kitchen but it went off every time I cooked so we moved it further away. I had a sign back then that said “Dinner is ready when the smoke alarm goes off.” I really haven’t had a fire in a long time.

I love the smell of fragrant foods cooking. When I think of the smell of cinnamon I think of cinnamon rolls, apple cider, spiced apples, and apple pie. I think it smells like love. The smell permeates the area and fills the room. I think love must be like that. When someone really loves you, it feels like it is all over you. It is hard to find a place that doesn’t feel loved. I think that is what the love of God is like. He loves us from the outside in and from the inside out. Jeremiah 31:3 ESV says “The Lord appeared to him from far away. I have loved you with an everlasting love; therefore, I have drawn you with loving devotion”. Cinnamon draws you in. It brings you to the kitchen from anywhere in the house. Cinnamon leaves such a wonderful smell all through the house. It seems to linger.

I think if God’s love has a smell, for me it must be cinnamon.