It felt awkward to have someone serve me, after all I’d come to serve that week and not to be served. I’ve learned long ago that I am filled by pouring out. It’s a weird economy. So when they offered a free lunch post-VBS, my low budget jumped at the chance. I feed teenagers now and with that feeding comes a hefty grocery bill. It is especially hefty during Vacation Bible School Week.

Many years ago I’d forged one of my dearest and best relationships over a peanut butter and jelly sandwich over just such a lunch. We both held wiggly babies, brown paper sacks on the table in front of us. Those wiggly babies are teenagers and now they too serve in VBS. That mama and I have been friends going on decades now. I treasure that and had it not been for that PB&J I am not sure we’d be the friends we are today. A free lunch and a chance at friendship were all it took for me to say yes when my teens asked if we were staying.

As I stood in the serpentine line that meandered around the corner I smelled grilled burgers and dogs, the kind that someone else cooks and never seem to be replicated at home, the kind that only requires that tiny packet of ketchup. I spied mamas and grandmamas with little ones herding them like disobedient cats. Chatter came from every direction, and crafts and goodies from the day littered the premises.

I was near the end of the line. It took a while before I finally reached the door leading to the food line. 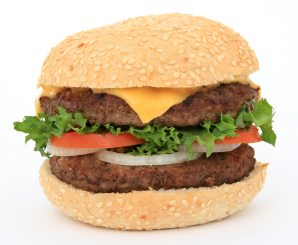 A gloved hand reached out to me and the Womenslife minister asked if I wanted a hamburger or hotdog. I paused. She repeated clearly. It wasn’t that I hadn’t heard her. I had heard her. I just wasn’t sure. (I was thinking back on that moment and the scene in A Christmas Story when Ralphie has gone to see Santa to request the coveted Red Ryder BB Gun. He has stood in line but when faced with the gravity of requesting the prize he goes completely blank and repeats “football” in a robotic fashion.) I chuckled at how I must have appeared to sweet Sheila, standing there, blank-faced, stunned into having to choose, a hamburger or a hot dog. In a Ralphie-like response, I squeaked out “hamburger.”

I was handed various side items and then a drink of my choosing. I sat down at a table next to my own teen, the once wiggly baby, and asked how his day of herding 3rd graders had been. He filled me in on the “flight risks” and “runners.” Being that he was a former runner, a kid at risk to vanish in the blink of an eye, abandoning VBS to the unexplored other things, I suppose he is akin to them and has a knack for picking them out of a crowd of 8-year-olds.

We sat at a table and P.K. handed out napkins. He made his way around a room full of volunteers, shaking hands, speaking words of gratitude and appreciation. Offering extra napkins to sticky fingers, messy faces, and Mamas in need. Paper napkins, that week I’d handed out my share, placing little cookies on each one for snacks. Now I was the recipient of those same kinds of napkins. I cast my eyes down as I thanked them, those who were serving me, but felt filled up by their kindness and sincerity of appreciation.

It was awkward to be served and not to serve but as the tables turned and I was being served I was reminded why the King came. To serve and not be served and how it must fill Him up when I serve others. A strange economy indeed.