“Lizzy Lessenberry!” Isn’t that just the most perfect name?! Mama’s voice was on the other end of the phone. I agreed it was a nice name but seeing as how she’d named me some forty years ago, I figured she’d’ve thought the same regarding my name. “Amy Elizabeth! Isn’t that just the most perfect name?!” I’d never heard such and I giggled at her excitement.

She had just finished telling me how she had taken Grace (her senior spoiled rotten dachshund) to the vet for a check-up. I laughed at that too. I am not such a vet checkup kind of dog mom. I am more of a keep the shots up to date, yard dog, feed them the food from the General Dollar Store kind of dog mom. Mama has told me many times, Grace is the best gift I have ever given her. She means it. So as she recounted how she had taken Grace for a check-up and another senior Doxie had been brought in “to be put down” she just couldn’t bear the thought and now Grace had a new roommate.

I rolled, “Mama, do you really think Grace is going to share your affections?” She assured me Grace was fine with it. I was a bit less convinced.

“She has cataracts, but all old gals do, you know, and a slight heart murmur, but she is spry and lively. I just think she needs to live out her days in happiness.” 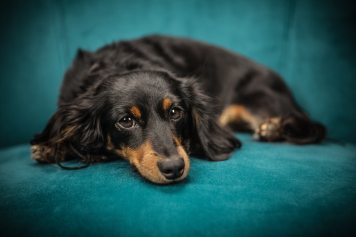 I laughed again, thinking Yep Ol’ Lizzy Lessenberry don’t know how good she’s got it now, car rides to the hardware store where she is pushed in a cart up and down the aisles of fixtures, paints, and aromatic lumber. Stops by the Starbucks on the way home for free pupachinos and maybe a quick nugget run. Weekly baths in fragrant doggy bath oils and now check-up visits to the vet. Yessir, ol’ Lizzy might think she’s already died and gone to doggy Heaven.

It wasn’t long after Mama got Lizzy that I learned a few extra things about her – lessons in perseverance and making the best of a difficult situation. Lizzy doesn’t have a tongue. Well, she has one, but most of it is missing, lopped off somehow in her younger days. She has adapted. She submerges her head to drink, eats on the side of her mouth, she still nuzzles as if she is licking her owner when she is happy, but she does not have a tongue to give those sloppy kisses with. She has earned the nickname “Bee-Bop” from Scott Martin because that is what he says she does, Bee-bops down the hallway or around the patio. Lizzy bounces and greets each new day with such enthusiasm.

A while back Lizzy had bee-bopped and bounced her way outside for her morning potty break. If I bounced to the bathroom the way Lizzy does, I would leave a trail behind me. Lizzy does not, typically she is quick to do her business and return to the kitchen for her morning hydration. Grace is slow and often hesitant to do the aforementioned. She doesn’t like to walk in the wet grass so early. Lizzy, however, is quick to relieve herself and bounces to her food and water bowls without issue.

One particular morning, she deviated from her norm as the fresh dew-covered grass had faint lines scrolled across it. I hadn’t actually noticed it at first until Lizzy was smelling those exact lines. I knew she couldn’t be seeing the lines but she was following them exactly. She bounced along those lines and I realized she was following a bunny trail. She had caught scent of the maker of the lines and lost focus of the task at hand. I called her name, and after the third time, and in a distinctly more stern tone, Lizzy Lessenberry refocused on her task.

There she was being a four-legged example of me and my walk with the Lord. So often I lose focus, distracted by the things of this world that I abandon the work that has been assigned to me. Likewise, the Holy Spirit has to call my name to get my attention and to get me to refocus on what I have been tasked with. I am grateful that when I stray, when I lose focus, the King is right there ready to redirect and to guide me just as my voice did that early morning for the perfectly named Lizzy Lessenberry.