But you, Lord, are a compassionate and gracious God, slow to anger, abounding in love and faithfulness. Turn to me and have mercy on me; show your strength in behalf of your servant; save me, because I serve you just as my mother did. Give me a sign of your goodness, that my enemies may see it and be put to shame, for you, Lord, have helped me and comforted me. Psalm 86:15-17

When we were younger my sister was a collector. At any given time she’d have a “collection” going. She collected all manner of things: trolls, cherubs, clowns. She collected sentimental things and not so much. Nowadays we’d call it hoarding. She was particularly good at collecting stamps. Ever so often we would have to make our way to the cramped stamp store on the top floor of the mall, Century Plaza to pick up a stamp or 10 to add to her collection.

I never really minded much because post stamp purchase we would make our way to Hickory Farms for a tasty sample of cheese and an inevitable beef stick purchase. If Mama was feeling real generous we would also be the recipients of a double doozy cookie and an impromptu trip to the Afterthoughts, a purveyor or fine 90s costume jewelry. It frequently featured a buy one get two free special affording Mama, Kel, and Me our own black plastic bag with a delightful accessory to call our own. I liked hoops, plain hoops. I still do. Kel liked big flashy earrings. She still does. All that to say I remember vividly those days. But the stamps, they never appealed to me, not really. To be frank they got on my nerves a bit. 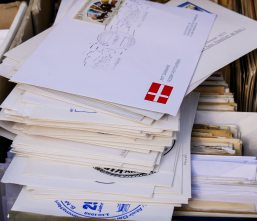 Recently Scott Martin began receiving a monthly parcel in the mail. The content of said parcel is most definitely of value but my favorite feature is the stamp on the top right of the envelope. I giggled when the first introduction to this monthly parcel yielded a batman stamp. From then on I’ve found myself looking forward to the choice of stamp atop his parcel. There have been, presidents, scenery, landmarks, and just for the eclipse last year, some eclipse ones, you can hold your thumb over the picture of the moon and it will eclipse. We kept that one and put it on the fridge.

A while back I found myself sans Martin children at a meeting we frequent. This meeting always has a “free table.” Much like their Aunt Kel, my Martins are “Collectors” so the free table affords them many a treasure. A pair of megaphone cheerleader socks, a book written in the 1960s that I am certain no one will read. A puzzle missing 3 crucial corner pieces. Any number of one man’s trash becomes a Martins’ treasure. Treasure laid out with an invitation of “Free” scribbled onto a piece of folded copy paper. We always leave with more than we came. So when I found myself at the meeting with no Martins I was certain I would leave empty-handed. That was, until I came across the stamp collection activity. There in yellowed envelopes were dozens of stamps begging to be catalogued and loved. I thought for certain my Maggie would love them. I couldn’t have been more wrong. She was not in the least interested. 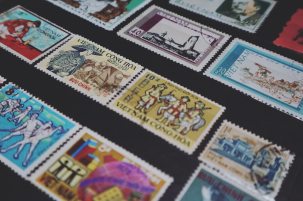 I had attempted to discard them several times since the meeting but I just couldn’t do it. They make me smile. I feel nostalgic when I see them. I wonder about the mail they’ve carried across the world. What those letters might’ve said, who might’ve written them. I’ve wondered about the hands that have purchased them and those that have removed them from their parcels. I’ve even wondered if the spit that licked them might be analyzed to reveal the licker was famous. Perhaps JFK licked that 1/2 cent Ben Franklin when he wrote to Jackie. Far-fetched and symptomatic of a way too overly active imagination I’m sure.

One restless night I organized an envelope of “210 U.S. Stamps” into colors. ROY G BIV to be exact. Just the act of quietly sitting and sorting brought a calm I hadn’t felt in a long while. I studied them and wondered and as I made the determination where each one belonged, I pondered its message.

There was one that struck me. I’m not much of a signs and wonder kind of gal, but I was in awe of that one. So many times as of late I’ve just not known what to do and I’ve resorted to looking for a sign. There printed on a 4 cent stamp from who knows when in history were the words “Pray for Peace. In God is our trust.” I don’t suppose He could have made it any plainer to me. The fact is I know Him, I just do not always whole-heartedly trust Him, and Peace has been known to allude me for far too long. I am thankful for the discarded collection of stamps and I am thankful that once again the King shows Himself faithful by using the discarded and seemingly unworthy to sooth my broken heart and to set me straight when I’ve been uncertain of the direction to take. 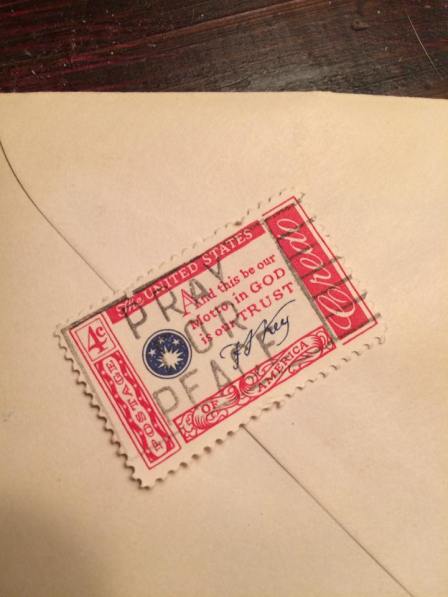