“Mama, why does this box keep moving around your house?”

Over the course of a few days and visits to my Mama’s I had noticed the small wooden box in a couple of different places. A long while ago it was a candy box, one of the very few gifts my Grandmother (known to me as Mam-Maw and I to her as Mamie) had ever received. I knew the box well, its family lore made its way through generations of stories. Once one of my Aunts pitched a regular ol’ hissy fit because she wanted the box. My Mam-maw had very few things that actually belonged to her and while she would literally give away the shirt off her back to someone who needed it, she wouldn’t part with that box for the sake of a whiny child’s demands.

I always giggled at that one, partly because I know all I’d have really wanted was the 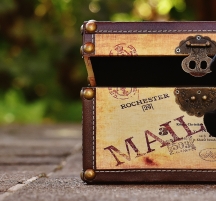 long ago consumed candy it held more than the actual box. Upon my Mam-Maw’s passing, my Mama inherited the wooden box with a hinged top and fading decoupaged landscape scene. It measures no more than 6 inches wide by 18 inches long. It is no more than 4 inches deep. And it is not what one could refer to as a priceless heirloom. To be honest I hadn’t given it much thought until it started to move around her home.

She lives in a small bungalow type garden home. The first day I noticed it I had made a pit stop in her guest bath. It was sitting on the edge of the counter. I wondered if she were planning to incorporate it into her bath decor, maybe a new container to hold hand towels. I shrugged the thought off and gave it merely a momentary thought as I made my way out of the bathroom. A few days later, I was in the living room and noticed the candy box not-so-family-heirloom sitting on the coffee table. I had nearly forgotten the presumed hand towel holder and deduced she must have decided against that. Again a fleeting thought, again no more than a momentary notice. Its final resting place at the kitchen table was when I asked my Mama that question.

“Mama, why does this box keep moving around your house?”

She laughed as she placed the cookies on a rack to cool.

“Look inside it. There are some letters in there that are old. Mama wrote some and her mama too. Some of them are pretty funny.”

I grabbed my reading glasses, a warm cookie, and I settled down at the table to read. Opening that candy box was like opening a treasure trove for this vintage-world-loving, word oriented gal. She was right, some of them were hilarious. Some of then not-so-much. Those letters were a part of my history. As my Great Grandmother, Lillie penned them, I wondered if it ever crossed her mind that her Great Granddaughter would one day be reading them. As I gingerly unfolded and read those letters I was awestruck. Here in faded writing on tattered soft, hundred year old paper were words of mundane and everyday life, a time gone by and hardly remembered today. One of the letters commented on a bad haircut leaving an unfortunate teenage boy with the repercussions of a novice barber, dull scissors, and poor economics.

As I pieced together some long forgotten history I pondered on the art of letter writing and was reminded of one who wrote letters that I had just been studying. Paul wrote letters, many of them. His last letter prior to his execution at the hands of Nero was written to Timothy. I read 2 Timothy with a new perspective. Timothy was Paul’s mentee, protegé, and those words were the last ones Paul would share with Timothy. I suppose if I were writing a letter knowing it were my last one, I would chose the most important things to say to the reader. Paul, inspired by the Holy Spirit would have likely done just that.

My Great Grandmother Lille and my Great-Great Grandmother Bertie may have chosen to write about something else had they known a century later my eyes would be reading the only part of them that I would ever know.

God wants us to know Him and He penned a beautiful letter to us in the form of the Bible. A beautiful work that tells us His character, His will, His Grace and His love for us.
His word, like that little candy box is a treasure trove of words written centuries ago and unlike that candy box of letters, the Writer is just as real and alive as when the words were penned.