One of my favorite Christmas memories is of my youngest child – who is now an adult, one with a very generous, people-minded heart. He has had that generous, caring spirit from the time he was a preschooler. It’s part of the personality God gave him.

During the Christmas season of 2000, he was a chubby-cheeked little 4-year-old, the youngest of 4 children, and the nearest grandchild to his paternal grandparents. We lived only a block away. So he was the baby, close at hand to be spoiled. 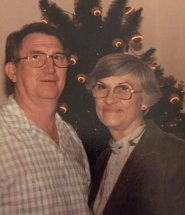 The grandparents had downsized late that summer. Both were well into their 70s with declining health, and had uprooted themselves from their home town to be near us in case they needed help in their latter years. We talked daily on the phone and saw them, if not daily, at least by the second or third day. On those days I found myself too embroiled in running the house and my gregarious 4-year-old hadn’t seen his grandparents in at least 24 hours, he would begin to beg to go see them “by myself.”

I could see Grandmother’s back door from my house and we lived in a safe neighborhood, so I would stand on the porch and watch him dash across the neighbor’s yard to get to his Granddaddy and Grandmother. It was their joy as much as his. Many times I could hear their robust, joyful greetings echoing down the street when he arrived there.

At 4, he was old enough he’d gotten money for his birthday that year – a $20 bill (from that same set of grandparents if I remember correctly). So late November my little guy announced that he wanted to go Christmas shopping with his own money. I told him sure, and that I would be glad to help him out with the money. But he was determined to “buy it myself.” (He was definitely in the “I can do it myself” phase.) 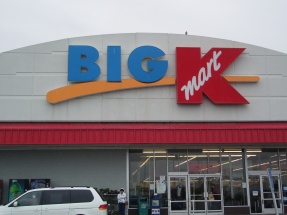 We dashed off to K-Mart one night, just my boy and me. He was determined to buy for Daddy, his brother and 2 sisters, Grandmother & Granddaddy, Meemaw Polly, and me, which he planned to do later with his daddy – 8 people to buy for with only $20. I really didn’t think it would be possible. I explained to him about taxes, and that each gift would have to cost $2.00-$2.50 at the most. I anticipated having to add some cash of my own when we checked out.

First, he found a fishing lure for Daddy for $1-something. Good so far. He got cute socks which were in the $2 range for one of the girls. And on and on he went with his shopping. Before we knew it we had trekked around all of Kmart and gotten everyone a gift that met the requirements, except for Grandmother. 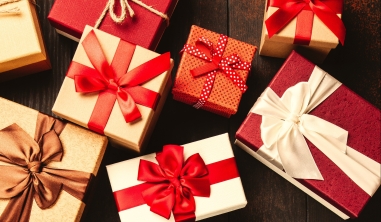 He was very particular. I made suggestions and showed him a few possibilities on the shelves as we walked by, none of which he liked. He finally said he wanted to get Grandmother a beautiful drinking glass he thought, so we headed to housewares. I wasn’t really sure we’d find anything that met his needs, but we looked. Suddenly his face lit up! He pointed a little higher than he could reach to a pretty, green cut-glass drinking glass. As I lifted it off the shelf for him to see, I realized it was light-weight and made of unbreakable plastic that looked like fragile crystal. He took it in his hands and felt of it for a couple of minutes before he declared, “This is it.”

He then started explaining to me why it was what he wanted.

“Grandmother’s hands hurt and she can’t hold onto those slick-sided slippery ones. This one has crinkled sides that make it easy to hold. The heavy ones are hard for her to lift, but this one is light. The skinny ones tip over too easily, but this one is short and round and can’t be bumped over by accident as easily. And it’s really beautiful! She will love it.” And you guessed it – it only cost $1.00. I was thrilled and stunned. He had studied his grandmother and new her needs and was on a mission to find just the right thing for her hands that were hindered by rheumatoid arthritis. 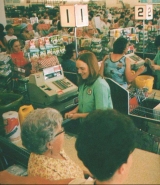 He had done it. He had generously bought for the whole family with his little $20 bill. At the cash register he had $2.00 and some change left over – just enough to go shopping with his Daddy to buy something for me.

That was one precious Christmas for our family. Grandmother never used any glass besides the green one for the rest of her life at home. It was exactly what she needed! She loved it! 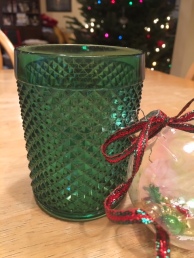 Grandmother and Granddaddy have passed away at separate times in the last several years. And you know what? I now have that cup in my cabinet. I now have achy, arthritic hands and cherish that light-weight, easy-to-grip cup that won’t tip over easily. Are there lessons in this story? Probably many. The lessons I learned from my 4-year-old? Study those you love and get them something that meets their needs no matter how small and inexpensive it is. Use what you are blessed with, no matter how meager it seems, to bless others. You will have the joy of giving and you will give joy that carries on for many years beyond that moment.

And most importantly, just like my sweet 4-year-old, our Heavenly Daddy knows exactly what we need! He studies us and anticipates our every need. For every situation in which we find ourselves, be it a trial, loneliness, or busy-ness, finanacial or relational issues, or having cancer, a broken heart, or arthritic hands, He is there with just what we need. He provides The Perfect Gift. In fact, He has already provided the Most Perfect One – His Loving Son who died on the cross as a sacrifice to redeem our sinful, broken hearts and lives and bring us into His presence for eternity.

Every good and perfect gift is from above, coming down from the Father of the heavenly lights, who does not change like shifting shadows. James 1:17 NIV 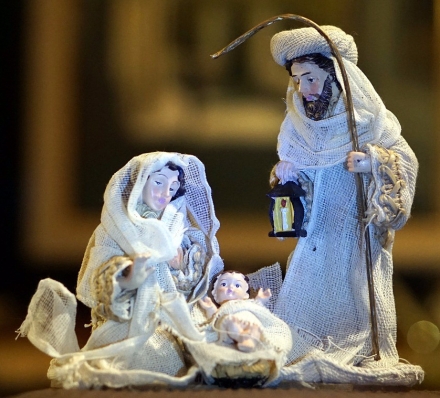