I do not have now nor have I ever had an exceptionally green thumb. Green is my favorite color and I love to be outside. The appreciation of the smell of grass, trees, and dark dirt runs deep in my veins. I come from a long line of bare feet preferred to shoes.

My Mama’s mama, my Mam-Maw was green before it was even a thing. She composted before it had a name in hoity-toity magazines as a way of enriching one’s soil. She never discarded a non-biodegradable milk jug in the trash. She repurposed them into bird feeders, kitchen scrap collectors, toilet brush holders, and ice water containers. She would fill them with water from her kitchen tap and place them in her ancient non-frost free refrigerator. I can still remember my sister and I scraping the “little ice” from her freezer and eating it – we ate shaved ice before it was even a thing! That milk jug ice water was the coldest and best tasting water. I’ve had all manner of bottled waters since and they all pale in comparison.

She’d take a brown paper grocery sack and reuse it until it was soft and leathery-like and no longer good for hauling stuff to and fro and then she’d cut it up for us “youngins” to play with. I’ve purchased many a pretend item from an imaginary store with tender made from paper bag scraps. She made clothes from old Jim Dandy feed sacks, and she could and did make an entire quilt out of scraps of fabric. I doubt she ever called it “repurposing” or “reusing” or “reducing” she seemed to believe everything, even bits of rubbish deserved a second chance at life, and she aimed to accommodate. 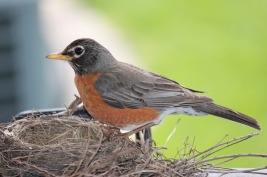 She loved trees, she loved to watch them and smell them. She would go outside, sit, and then she’d grow quiet. She would speak only to point out a squirrel nest or a particular kind of bird home. She used to tell me that each of her grandkids was represented by a particular kind of bird. I wish I’d had the foresight then to remember everyone’s. I only remember mine. A Robin red breast, she’d say “because they are unique and Mamie you are a unique youngin.” She saw something in me I reckon that I didn’t and evidently the Robin red breast had the same qualities.

The trees and outside seemed to give her life and as I’ve gotten older I’ve witnessed my mama head out-of-doors for some life giving and soul filling. As I have gotten older, I to do the same. I have a particular place in the backyard that serves to recharge me when I am depleted mind, body, and soul. I talk to the King there and listen to the breeze whisper through the leaves. It never ceases to amaze me that wind through trees sounds so much like rushing water in a stream. All of my senses are fed as I sit in the quiet of that place. Often I will leave my phone inside so as not to be distracted by the things of this world, half an hour there can fill me up for ten fold that time of pouring out. 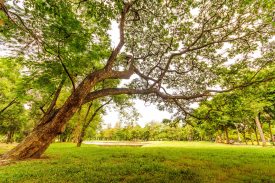 I was spending an afternoon doing the aforementioned, when I thought about life-giving trees. As I exhaled deeply, the thought that my carbon dioxide would be turned into oxygen confirmed that life-giving hypothesis. I pondered on and chatted with the King and I recollected another kind of life-giving tree. The one my precious King was nailed to. The tree that ran red with blood spilled so that I could enter the Holy of Holies and talk freely with the God of the universe. A tree that lent itself to an unimaginable death so that I, we, could be part of a new covenant established and be in relationship with God.

I recently learned that Psithurism is the name given by science to the sound of the wind through the trees. I also learned that spirit in the Greek is pneuma, or breath. Perhaps the Creator purposely designed it so that when that pneuma, or spirit, was breathed into us, a holy CPR of sorts took place. The catalyst for that Life resuscitation began on that tree with the death of Jesus. Death defeated and the King resurrected.

My Mam-maw wasn’t super theological. Her eighth grade education carried her as far as possible given her difficult life and hard economic times. She knew the Bible. She couldn’t really quote the Word verbatim, she would have buckled if she would have had to preach a sermon, but preach she did. A different kind of preaching I suppose, the kind where words are few and actions speak loudly. She loved the Creator and she valued His creation, I strongly suspect that is why she honored it the way she did.