She calls it the Lord’s Pool, God’s Pool on occasion. I have no idea why, but if I had to guess I would say that I told her it was His pool because He provided the way to go there.
As long as she’s been alive it has been a staple in the Martin Summer. My niece Ellie Grace, gets to spend a large majority of the summer as a Martin and because we frequent the pool so does she. That particular pool became a part of our everyday many years ago.

It all started one summer some years back, to date one of the most difficult summers for Scott Martin and myself. We were ill-equipped house parents at the local children’s home. We had 3 unique Martins of our own, a home full of diverse and unique children, and some marital trials that we just were not equipped to sort through. The pool became

a welcome and frequent diversion. I remember spending those first of many pool-going times counting. Counting people to make sure all were afloat, no one had drowned on my watch. I also spent a lot of time treading water. Hours in the deep end turned to days it seemed. Teaching children the art of something that is second nature to me, something I could do long before I could walk. Reaching for little hands extended in my direction constantly encouraging and cheering on, “just a little farther, you can do it.” Reassuring time and again that the water was nothing to be really afraid of but to be watchful and on the alert at all times, a healthy fear, is what my Mama calls it.

I spent time squeezing those same wet extremities into puddle jumpers and arm floaties. Applying layer after layer of sunscreen. I applied sunscreen like layers of sealant covering sun exposed bodies. Countless cans, bottles, tubes in all manner of SPF but none less than 30, have sacrificed themselves in the name of UV protection within its enclosure. I’ve secretly often wondered if all that sunscreen has left a hole in the ozone just above this tiny oasis. And I would tread water, sometimes for hours. Trying with everything that is in me to stay afloat. I would cheer from the water as wobbly terrified knees made their way to the end of the diving board, the dull thud typical accompaniment for the inexperienced jumper in contrast to the high-pitched clang of the experienced diver.

I’ve judged multiple cannonball, back buster, belly buster, toothpick, can opener, and amateur diving contests, all the while I would tread water. Unable to take hold of anything but the water itself. I’ve witnessed countless Mamas utter words I’ve uttered myself and seen record numbers of cardboard crust pizza place pizzas make their way there, their boxes discarded in the familiar garbage cans that dot the perimeter. Things have changed, yet somehow they seem to stay the same, and I would tread water. I would return home exhausted and energized all at the same time. My own stringy wet hair, sun-kissed shoulders, and “noodle legs” proof of the day’s adventure. The deep never alarming or scary to me, but exhausting just the same.

I’ve packed thousands of pool snacks in all manner to feed the hungry masses declaring their starvation. Their behavior and famished declarations would lead you to think they’d never seen food. Needless to say, a mere 30 minutes before they had devoured a Popsicle from the snack room freezer purchased with quarters from a ziplock bag that is itself a staple in the pool bag. The plastic ziplock bag of coinage shares space with books that have worn and tattered covers, dog-eared pages made that way from constant trips home and back alongside soggy towels and pool toys. I carry them just in case, not because they’ve actually been read, because they haven’t. To date, I can not think of one book I’ve actually started and finished there. 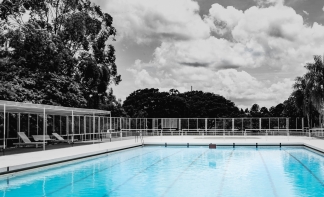 These trees that surround that place have witnessed much. In the Martin home alone it witnessed, Ellie Grace’s first steps, the emotional caution that always follows a period of uncertainty, countless refereed arguments amongst those named Martin, milestone birthdays, a visiting raccoon that had a hankering for sweets, his craving quickly satisfied by said arguing Martins. Each upcoming school year lesson plans laid out and navigated on the umbrella covered wrought iron table, none exceptionally level, but very functional all the same.

The Martins have always had an uncanny knack for ushering in thunder, requiring a 20 minute hiatus. I don’t mind the hiatus so much yet the snack bag is given a workout.

The items of the lost and found have never stayed lost for very long, the Martins have a way of finding something lost or broken and giving it purpose. Recently a game of “whack-a-mole” was played in the 4 ft by Charlotte and Shelton with an abandoned and faded pink noodle. Imagination, necessity, and discarded rubbish are the makings of invention for the Martins.

As time has passed and much has changed and much has stayed the same, I find that I don’t tread water as much. I’m finding that the investment early on is paying off. I suppose that pool, the summers are an allegory of parenting itself. Invest early, do your dead level best not to drown or let someone else drown, and when they are older they’ll take to the water with a healthy fear, never fully aware of the sacrifice that was made on their behalf. As second nature to them as anything, and they will pass that art on to their very own.

The King’s Word says something to that effect:

Proverbs 22:6 Train up a child in the way he should go; even when he is old he will not depart from it.

The days of being waterlogged and weary have turned into life lessons and memories that they will carry with them forever. Ellie Grace named it the Lord’s Pool and it is indeed, both metaphorically and literally. I am beginning to understand that all those days of treading water, I was never alone, laughter was never in short supply, and watchful eyes from above were always present.