About 3 months ago I was doing laundry. I had pulled out a load of whites, bleached and ready to be dried. As I pulled those chlorine laden clothes, towels, and sheets out of my washer, I inhaled deeply. Bleach always reminds me of my Grandmother, I called her Mam-maw. She lived in a time when in her words,

“We might didn’ta had nothin’ but we were clean. Bein’ poor ain’t no excuse for bein’ filthy.”

I had heard her say those words countless times as I grew up.

When I was a little girl she would “warsh my hands and face” with the hottest bleach and dish soap water. Just thinking about it now makes me wince. My four-year-old digits would involuntarily recoil as she wiped away any residue my lunch may have left behind. “Hold still Mamie!” I can see myself sitting on that homemade bench next to her kitchen table, my feet dangling, face and hands tingling more from the heat than the bleach. Her hands always smelled like bleach. Even long after her mind went away and her body was still strong, her hands smelled of bleach. 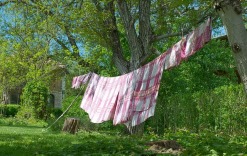 She was a hang out to dry king of gal. She shared a clothesline with her sister-in-law and also neighbor. Facing the road My Mam-maw’s side was the one on the left. There was something magical and intoxicating about fresh sheets whipping in the wind. My sister and I would run and play through those linens with a delight and carefree nature I have not known in my adult life. Inevitably Mam-maw would yell out from the kitchen window,

“You youngins better get back from my warshin’!”

She had to have known that we were there, that we had been weaving in and out of those linen walls made of clean cotton for a while. In hindsight I see now that she likely didn’t start fussing until we had wandered to the right side of the line and risked inadvertently pulling down her brother, Big John’s overalls.

As I pulled my own laundry out I spent a moment in my childhood, meandering down Memory Lane. It was the he rust colored spots that yanked me back to reality. My bare feet weren’t on a grassy hill in the clothesline of the past, they were standing on the concrete floor of my basement. As I pulled my recently re-spun load of whites from the washer I noted that my rickety old washing machine had deteriorated even more than the last time, spraying rust colored stains all over my fresh laundry. I sighed, I’d already reckoned that two spin cycles were necessary to drain the clothes. I had long ago noted how the “spin” hadn’t been as effective as it once had and how I had to manually switch the knob to request the spin cycle several times. I had reduced the size of the load all in an effort to reduce the workload of the already taxed and band-aid covered dryer. They were a pitiful pair those two, my washer and dryer.

As I sorted and divided the load into portions to accommodate the dryer, I calculated what a new washer and dryer might cost, coming to the realization that there was no way our budget would accommodate such a purchase. I said a quick prayer. Something along the lines of

“Lord, you know how sketchy this washer and dryer are, you reckon you could provide me with some new ones.”

As I continued on with the laundry task, I pulled from the dryer a fully assembled and intact Lego dude with a cape. I smiled and put him aside. Someone would be looking for him soon enough. I smiled thinking how for years my dryer has chinked with the sound of stray Lego parts, all manner of bricks, and such. The stuff great structures of imagination are made of. I transferred the wets into the dryer, threw in a dryer sheet, and turned to head back upstairs. I had not even made it the ten feet to the steps when I received a text from my husband. 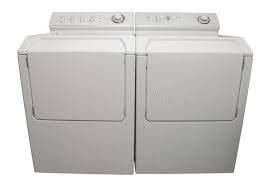 It said, “Hey do you want a new washer and dryer?”

My stunned response. “Are you kidding me?’

Some friends were upgrading and were getting rid of their old ones; we were the recipients of their good fortune. I marveled at how, not even moments before I had asked, well sort of asked for a new washer and dryer and here in the form of a text message was an answer to that very prayer. The new, used washer and dryer have blessed us tremendously. The dryer still chinks with Lego pieces, and when the washer spins I still look around for a helicopter landing. The new ones are sort of high-tech-like with literal buttons and bells on them, but I am becoming accustomed to them. The old pair made a trip to the recycle plant, which in itself is an adventuresome outing for the Martins.

1 Peter 5:7 says to “cast your anxieties on Him (God) because he care for you.” That day the King demonstrated the very essence of that to me. He alone knew I had prayed that. I hadn’t told anyone. I was too busy meandering down Memory Lane. He knew I needed a faith builder, and he chose to use a second-hand washer and dryer to do it. 2 Timothy 2:13 says that even when we are faithless, he remains faithful. That day as I said that quick prayer I was lacking the faith that the King would move on my behalf. I will admit that even as said it I did not quite believe that I would be the recipient of a new washer and dryer. Despite that though, His goodness was not, it is not, contingent on my belief. He is faithful, even when I am not. Since then, I have yet to do the laundry without the reminder of the goodness and faithfulness of God, and the tangible evidence that He hears our prayers and is our provider.

If we are faithless, he remains faithful. 2 Timothy 2:13