Let us throw off everything that hinders and the sin that so easily entangles. And let us run with perseverance the race marked out for us, fixing our eyes on Jesus, the pioneer and perfecter of faith. Hebrews 12:1-2

I rarely bought my lunch at school.

I mostly brought my lunch.

In hindsight I see now that it was likely because I can be a picky eater. Mama in her wisdom would have recognized my picky tendencies and packed a lunch more likely suitable for my particular consumption. I have never been picky like no veggies and heaps of carbs picky. I’m very familiar with “chicken finger and fries pickies,” in fact, I have one or two of those in my home – the ones who only want chicken fingers and fries regardless of the menu selections to choose from. I tend to be the please-don’t-let-my-food-touch, that-food-doesn’t-match-this-food-so-I-won’t-eat-them-together, eat-my-meal-in-a-particular-order kind of picky. I honestly never realized I was a picky eater. I love turnip greens, tomato sandwiches, squash casserole, a good steak. I can devour a crab leg with a speed and skill that has earned me the “crab leg opener” title when our family has a celebratory low country boil. So picky just didn’t seem to cross my mind.

When on the rare occasion I bought my lunch, Mama would ask me about it at the end of my school day. Once in kindergarten I told her I had my favorite food for lunch that day, the one that starts with a “B”.

She continued to inquire; had Google existed at the time, a search for B foods would have yielded no help at all.

Finally she said, “Well I don’t know. What?”

I have always love spaghetti. I suppose there are a lot of people who have an affinity for the pasta dish. I mean, how could they not? 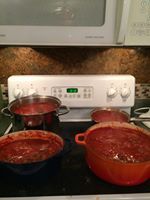 Pauline could make the best spaghetti sauce. There was nothing like it. It has simply been known in our family as “The Sauce.” It contained potatoes and a beef roast. Meatballs that were the size of my 6 year old fist, laden with cheese and green onions, celery and bread crumbs – they were a marvelous delicacy. A perfect balance of savory and sweet, the perfect consistency, the sauce covered every spaghetti noodle with perfection.

My Grandpa had the biggest chest freezer I’d ever seen. He would open it and, like a scene from a sci-fi movie, a chilly fog would obscure my vision. He would reach down into the frigid darkness and pull out all manner of delicious consumables. He seemed to have an endless supply of Otter-pops. He would pull out packages of homemade Italian sausage, what I wouldn’t give now to have some. He would have tiny frozen red bricks, partially occluded by the frosty white containers that would be thawed into spaghetti sauce at the hour of my Mama’s choosing.

Even now I long for some of those foods of old. I’d venture to say that the banquet meal Jesus is having prepared for us in Heaven will consist of Pauline’s Sauce, stuffed artichokes, ambrosia, and an Italian Cream Cake. Every pasta centered meal since has paled in comparison to those.

Looking back it almost seems too good to be true. Those meals were delicious no doubt, but I wonder if the longing for the things of the past are in fact a hindrance for me going forward. Recently I had the privilege of being the “Pusher’ on the playground. Multiple Kindergarten and Preschoolers were on swings that barely let their feet touch the 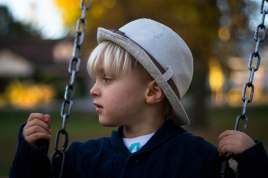 ground, I found myself bombarded with requests to “Push me! Make me go high like a rocket ship!” One particular client kept turning back in his swing, when he would turn his body to look at me and command me to push higher, his swing would go all wibbly -wobbly and slow him down. We would have to regroup and start over. He quickly became frustrated when he would look around and realize that his cohorts were all rocket ship high and much faster than he was. I kept trying to get him to understand that looking back was what was ultimately slowing him down.

Over the course of our playground time, the King used my instruction to the wibbly-wobbly Kindergartner as a teaching moment for myself. I am often looking back, looking around and comparing. I like to reminisce about the good ol’ days. I look to my left and to my right and find myself comparing myself to others. I never seem to measure up to my cohorts; those feelings of inadequacy lead me into feeling anything but content with the present. Paul writes in Philippians 4:11, that he has learned to be content in whatever circumstance.

It has taken me some time, and I am still not where I hope to one day be, to realize that when my vision is focused on anything but my King and the truth of his word, I am guaranteed to be a wibbly-wobbly kindergartner on a playground swing. Jesus called Peter out onto the waters and Peter walked on the water as if it were as solid as pavement. But the moment Peter took his eyes off Jesus and looked at the storm around him he sank like a rock. Had it not been for the outstretched hand of his friend Jesus, Peter surely would’ve gone under succumbing to the depths below.

Pauline’s sauce was delicious, it remains one of my favorite all time foods. I continue to be food weird. It can come in handy when playing an icebreaker game at a party. People always look astonished when I say I don’t like my food to touch and I eat in a particular order. They also frequently inquire if I understand that “it’s all going to the same place anyway,” an implication that the anti-touching thing is pointless. I typically answer yes, I do, but that isn’t going to change how I consume my food.

When I was younger I took several weeks and made an unforeseen investment. I spent weeks, maybe months, in my Grandmother’s kitchen. I learned under her tutelage how to make “The Sauce”. I alone know the secrets it holds. I prepare “The Sauce” for special occasions, I never think it tastes as good as Pauline’s but those who have tasted both assure me it does. They assure me that my “B-B-Ba-skettii!” is just as good as it was in the old days. 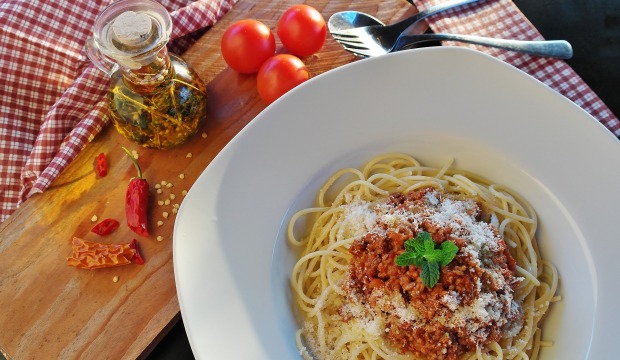