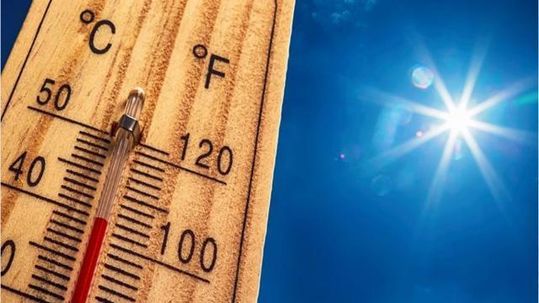 It was a declaration. She was adamant. The sweat was dripping from our brows into our eyes. The sting of it making an already dreadful experience worse.

We had been to the grocery store.

On a Saturday afternoon.

As we hurled our groceries into the back of her sporty SUV we were drenched in sweat and covered in stress. The blacktop parking lot only served to make a bad situation worse. We had filled our baskets with food enough to feed a family of nine and maneuvered our way through others who had set out to do the same. As we navigated the crowded store I had heard her informally curse under her breath several times. She has some standard phrases of unofficially cursing which include but are not limited to:
“For the Love!” “Come on people Get it together!” and “WHAT ARE WE DOING?!” (She often says this with an emphasis on the we and the doing)

She is an enthusiastic user of the English language and there have been many a popular phrase whose genesis was with her. Her level of patience and clear exasperation with people and the situation was evident that day. This was clearly evidenced by the response she had given me, “It’s not that hard.” Whereupon receiving instructions on

starting her car, I looked at her dumbfounded. Unlike my own tired old minivan with duct tape holding the seats together, her vehicle did not require a key. In fact, there was no ignition in which to place said key to start the car. I stared at her, mulling over how exactly I was supposed to turn the key in the nonexistent ignition “Just get in, push the pedal, and push the button.”

“Yes! It’s not that hard! For the Love!” A string of informal profanities propelled me out of the grocer. To my surprise she was right. It wasn’t that hard. Technology and engineering at its best, a far cry from a hand crank Tin Lizzy.

As we meandered our way back to our place of lodging, I began to ponder on that declaration. The one about going to Hell, or rather not going to Hell. I thought about the certainty of her declaration, the authority with which she had spoken it. It was the kind of certainty that accompanies a fact. A vow of sorts. An altogether different kind of swearing.

As I’ve pondered on it still and giggled to myself, my sister’s words still ringing in my ears, I too have given pause and examined my eternity. I’ve pondered about what a declaration means for me. Not just any ol’ declaration though, that one in particular. As a Christ follower, I can confidently declare, “Lord, I’m not going to Hell.” The King’s Word says that He can restore to us the joy of our salvation (Psalm 51:12). I was five years old when I met Jesus. When I declared I would be with Him forever in Heaven. Five, hardly a kindergartener, yet I knew I loved Him. Back then, I would not have necessarily defined myself as a “Christ follower,” I hardly knew how to follow anyone, other than my parents and my soon to be Kindergarten teacher, yet there I was, riding down the road in a green 1970-something Chevy Impala giving my life to Jesus. The faith of a child, blindly committing to Him my everything. A decision that to date supersedes any other I’ve ever made. I do not distinctly remember jumping up and down in celebration but I do remember being happy about it. The certainty that had come with knowing not my future, but the outcome of my eternity, there was comfort and joy in that. There still is. 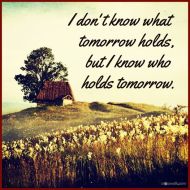 My Mama has a sign in her kitchen, likely a gift she received, that says “I may not know what tomorrow holds but I know Who holds tomorrow.” I suppose that sums it up nicely. I can trust my future is in the Hands of My King and in knowing that I needn’t worry about what will happen, or not happen, tomorrow or the next day or the next. I need only to trust Him.

I like to keep it real. I have real flaws. I’m a real hot mess. I try hard to be real honest, and if I’m being real, I will admit on a day-to-day basis I do not behave as if I am overjoyed with my salvation or that I trust Jesus to take care of tomorrow. I’ve come to realize that may be partly why I struggle so.

The second part of Psalm 51:12 says “grant me a willing spirit, to sustain me.” Perhaps, therein lies the solution to the problem. The joy of one’s salvation, the beginning of a beautiful relationship – how exactly does one get that? The answer seems to be simple.
Go back. Now I know I can not be five years old and even if I could master that one, I’m not sure I’d want to, those teen years were hard to say the least. However, what I have learned is when a relationship gets tough, it helps to remember how and why it began. My relationship with Jesus is the same way.

Ask for a willing spirit. I can pray and ask for a spirit that is willing. Willing to be all that He calls me to be. The Holy Spirit that lives in us has the power to sustain. To maintain that state of joy even when my emotions want to dictate otherwise. 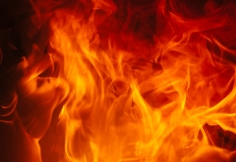 I would venture to say that an Alabama summer isn’t as hot as Hell, although there are certainly times it feels like it might be really close. There are sometimes subtle reminders that I can take comfort in and one of those is knowing that in Christ, my salvation is secure and I can be thankful for a guaranteed eternity and a gracious King who gave Himself for me so that I can boldly take hold of His promises and know without a doubt that I am not going to Hell.