And we know that in all things God works for the good of those who love Him, who have been called according to His purpose. Romans 8:28

Have you ever had an unwanted guests just show up and decide to stay for a while?

On top of that, did those guests have four legs, fur, sharp teeth, and long tails?

We had not one or two, but five of those guests serve as a welcoming committee when we arrived at our home.  Since country living is new to me, and I am just a city girl from Florida (and most recently Alabama) hoping to adjust to transplanted life amidst the corn fields of Ohio, when these four-legged, furry guests took up residence in our home, it was a shock!

But God is ever purposeful!  Nothing He does is without a plan and goal in sight. As finite beings with limited vision into today and even more limited into tomorrow, we can often find ourselves struggling with the unwanted events that we feel God allows to enter our lives. I didn’t want those raccoons in my house!  I didn’t want the disruption they were bringing to my life. No sooner had we gotten the moving truck unloaded, they showed up! 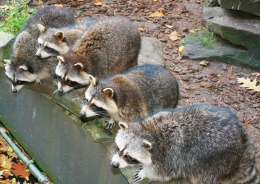 But wait!  Upon further investigation (i.e. crawling through the basement duct work, removing the basement ceiling, following the traces they had left behind) we found that they had not JUST shown up – they had been there long enough for momma raccoon to do some nesting, have a full litter of babies, wean them, and begin to train them in the habits of nightly scavenging hunts.

What we were actually hearing was not just one or two, but a momma and her four babies, night after night, crawling out of the house for their hunting adventures, returning in the early morning hours a little playful and energetic from their adventures, and then finally getting quiet by mid-morning and through the remainder of the day. They had actually not just showed up when we moved in but had been there for several months at least!

As we saw it, we had two options – live with and accept them as permanent guests or find a way to clear them out and claim our new home as our own.

Life is about claiming what is ours. Sometimes that requires clearing out a space or two, sometimes it requires doing a total overhaul.

In our spiritual life, it is also about claiming what is ours – ours through the power of God. Though we might think the daily struggle we face with unwanted issues in our lives is brought on by this person or that person, this situation or that situation, the reality is that our real struggle is far deeper than what we see with our human eyes. Our struggle is against those forces of evil and darkness, spiritual wickedness that we can’t see with our human eyes (Ephesians 6:12). Those are the unwanted guests that take up residence around us, interrupting the lives that God has planned for us, causing us turmoil and unrest, unbelief and anxiety. We have two choices – live in defeat and despair while we allow Satan to rule and reign in our lives, or claim the promises of God, put on the whole armor that He has provided for us, and defeat Satan through the power of God!

Satan is real. He wants nothing more than to steal our joy, kill our desire to serve God, and destroy our testimonies (John 10:10). He is at work! He is someone you can’t see, but who is at work underneath the surface of our lives, our homes. He’s working to cause whatever disruption he can orchestrate.  But the choice is ours as to how effectively he works in our lives.

We had a choice to make with those raccoons – let them stay or get rid of them. Getting rid of them was a time-consuming, difficult, sometimes nasty job. It even required help from others. Each evening we set the traps, baited the critters with sardines, peanut butter, or some such tasty treat, and went to bed hoping to find the trap occupied the next morning. Some mornings it was, some mornings it wasn’t. Some mornings we woke to find that the critters had actually figured a way to remove the treat we had so carefully placed for them, without setting off the trap! Go figure!

Finally, after days and nights of endless effort, and great perseverance on our part, we caught the last one (at least for this season). Then the rest of the work began. We had to clean out and repair the damage that had been done, making sure to close off the entrance they had created for themselves.

Getting rid of and banishing Satan and his minions from the occupancy of our thoughts, our homes, our lives, is only the beginning. We must secure our hearts, our thoughts, our actions to ensure that he is not able to take up residence again. Putting on the full armor of God daily, along with the power of prayer, forces him to know that we mean business 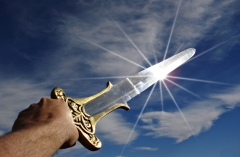 (Ephesians 6:13-18).  The weapons of our warfare are not of the flesh, but are powerful through God for the demolition of strongholds (2 Corinthians 10:4).  With the spiritual weapons we have been given we no longer allow him to wreak havoc in our lives, destroying our homes, our families and our relationships, but rather we take action and stand firm against him.

While we know that those raccoons are only gone for this season, and there are many more raccoons out here where we live, we are prepared to face them again in the future.  We know that our home is ours, we have sealed the entry way that they used, and we know the signs to watch for when they try to enter again. In our spiritual lives, God has sealed our hearts with the blood of His Son through the redemptive work of salvation.  Though Satan cannot touch our eternal security as believers, he can still battle for our joy and peace.  Be prepared! Know what to watch for, those schemes that Satan uses.  Stay battle-ready every day with the weapons that God has given us.

As I said at the beginning, God never does anything without a plan and purpose in mind.  What we thought was a disaster, turned out to be a huge blessing!  Isn’t that just like our God?  In finding the damage the raccoons had done, we also found some leaking water issues when the repairs were being done.  The repairman said that the leak was serious, but we had caught it in time. If left unfound it would have created a serious mold and bacterial issue.  So, even though that meant a longer and more detailed repair time, we were praising God that it had been discovered.  If those racoons had never come to our house, the issue probably would have not been discovered.  Can we claim, all things do work together for good to those who love and serve Him (Romans 8:28)? Yes, we can!

Now, can someone please tell us how to get rid of the pesky hole-digging moles? 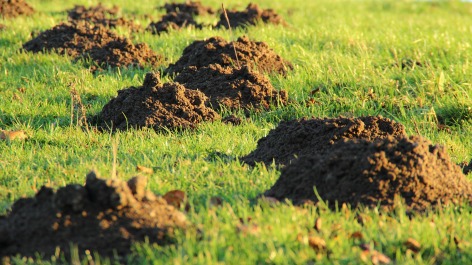